There are lots of people.

Here are five we’ve encountered, among many more.

This guy was playing for change with his buddy the harmonica/guitar player.  Have tried

(unsuccessfully) a variety of ways to put a minute and and half video of him playing on the web page for you.  Instead, these two stills will have to do.

Imagine the clear sound of the Irish Penny Whistle in the night mixed with people walking all the while talking in languages a plenty.

He has amazing, storied hands.

Near where we are staying is the government center.  The entrances to the government buildings from the sidewalk are all gated and guarded by GARDA’s.  Thy have been very pleasant when we’ve engaged them with our untiring (but probably tiresome to them) questions.  Anyway, one is named Conor.  When we asked his name, he told us.  Then he asked for our names.  I told him mine.  He was polite.  When Patricia told him . . . “My name is Patricia  . . .”  she paused here . . .  then said, “McGee.”  “Oh, that’s a good Irish name,” said he. 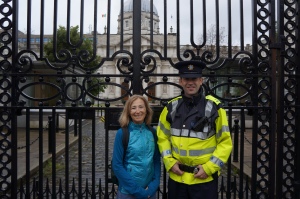 And they engaged in a lively and friendly conversation that concluded with him telling us he spends some time in Dingle and we should watch for the local dolphin – “Been there more than 20 years, name of Fungi.”  Delightful, spontaneous conversation on the street.

We stopped on Tuesday evening at “The Trinity.”  Our wait person was from Brazil, which she pronounced as “Braaaa-cil.”  Her name was Sondra, with the “Son” more drawn out than the “dra.”  She told us she has been in Dublin for 4 years.   “Originally, I came for 6 months, and then have just kept extending my visa until now.  I think I will go back in September.  My family is all there.  I am the only one here.  I have loved Dublin.  It is a good place.  But is it time for me to go home.”  Wish I had thought to get a picture of her.  But his is where she works:

She is the one who served us our required-on-your-first-day-in-Ireland-pint of Guinness.

Then on the way to the Archeology building of the National Museum of Ireland, (some of you may remember this image from an earlier blog – this time it is from our camera)

we stopped at a “grand” Irish woolen shop.  The sales woman, who was animated in telling us about “Katie Taylor who got the gold medal in boxing at the olympics.  You know we are a small country and we really get into sport,” described their business in words sort of like these from their we page:

Cleo originally began in 1936 as a very small retail outlet in Dublin, selling only hadnknit sweaters from the Aran Islands. Nowadays, Cleo is a thriving and very colourful business. 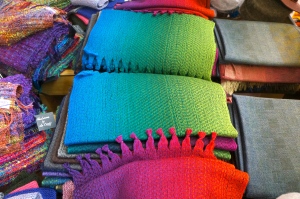 We are located on Kildare Street in Dublin City around the corner from The Shelbourne Hotel.

We specialise in Irish clothing made from natural fibres. We sell handknit sweaters in a variety of styles and colour for men, women and children as well as coats, capes, linen blouses and shirts, hats, bags, socks, tweed mice and a whole lot more.

we have some incredible clothing made by artisans and craftspeople living in Ireland.

And, we stopped in the Oriel Gallery, because I was drawn in by the stained glass above the door.  It was made by “our leading living Expressionist,” Markey Robinson.  He was born in Belfast in 1918 and died, I think, in 1999.  He once said: “art, just like life, needs more than raw intellectualism or theoreticism to sustain it.  It must have feeling and soul.”

Life, for us, is certainly peopled well.