Anyway, wish I had gotten a picture of Samuel Greene (81) and Sean O’Neil who allowed us to engage them in conversation after church.  They were extravagant in their welcome, and then some.  We learned about them, about the church, about things we needed to do to protect ourselves from theft, and about the color of the eyes that will tell you something about the Irish, and lots more.

But here are some others we saw on this Sunday in Dublin.

A man in a hat about to accept customers into his horse-drawn carriage.

This gentleman musician was playing his penny whistle for change across from the entrance to Trinity College on Dame Street.

This woman asked us for the time. I showed her my digital watch. She did not understand the numbers on my watch that read 11:30. Patricia showed hers. A real watch with 12 hours that go around in a circle and all. The woman smiled and understood. Patricia offered to reset the woman’s watch. She agreed. She was so grateful to Patricia, that she gave Patricia a big hug, and, among other things, said, “Christos.”

Not really a face, I know, but this 9th century grave-slab had these words by it:
“This 9th century grave-slab stood outside the tower of St. Audeons’s for centuries. It was rumored to have a supernatural guardian, despite being moved a number of times from the church, it has always been returned to its rightful place.
In 1308 a marble cistern was erected in Cornmarket to provide the citizens of Dublin with their first supply of public water supply. The lucky stone was set up beside the cistern so that all who drank the water might have luck.
Local merchants believed that success in business depended largely on making a daily visit to touch the stone.
In 1826 the Lucky Stone was stolen by people from outside Dublin. However, during the theft the stone became heavier and heavier until the horse collapsed under its weight. The thieves dumped the stone on waste ground. Later, when workmen attempted to smash it, the stone moaned and rolled.
Reverend Dr Alexander Leeper (Rector and Prebendary 1859-94) set the stone in its present position in the 1860’s. It is said the ghosts of clergymen still walk the passageway to protect the the stone.”
Wow.
First UCC in Eagle River is 125.
St. Andrew UCC in Sarasota will be 50 in 2016.
St. Audeon’s is 800 years old.
Perspective!

what a great breakfast . . . or actually it was brunch!

Sunday was laundry day for us in Dublin. We took ours to the All American Launderette. “Brilliant.” 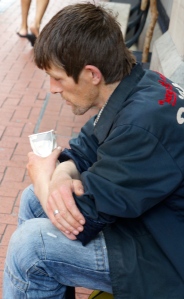 This gentleman, by the way he was seated at the side of the street with the cup in his hand, seemed in need.  He was sleeping as we passed by.

This woman agreed to have her picture taken – as did most of the others in this series. We paid her for the song . . . and the photo.

This is Eugene Quinn.  He is one of three celtic musicians playing at the Temple Bar tonight.  Bought their CD.  Wanna listen?  Come visit us.  Such a fine trio of Celtic musicians! – “Ladlane Out of Dublin.”

That is who we saw today.

It has been a great day.

Tomorrow we go to Glendalough to be with Mary Meeghan for a eight days.

What a grand adventure!